2017 offers a very rare chance to see the original sketches of the ‘peace symbol’.  Special Collections and the Trustees of the Commonweal Collection are lending them to a major exhibition at the IWM, People Power: Fighting for Peace.

Artist Gerald Holtom created the symbol in 1958  for the first Aldermaston March (organised by the Direct Action Committee); it was later adopted by the Campaign for Nuclear Disarmament and many other groups and campaigns working for peace, making it one of the most recognisable and powerful designs ever created.  Holtom’s original sketches are very fragile and so can rarely be shown to the public. This exhibition is a wonderful opportunity for us to display them to great numbers of people for the first time.

People Power explores 100 years of anti-war campaigning in Britain through 300 objects: banners, posters, flyers, leaflets, paintings, letters … Many have never been exhibited before. In addition to the sketches, we are lending a pencil drawing of Peace Pledge Union founder Dick Sheppard by activist and artist Peggy Smith and a range of letters and ephemera relating to the anti-nuclear campaigns of the late 1950s and early 1960s. 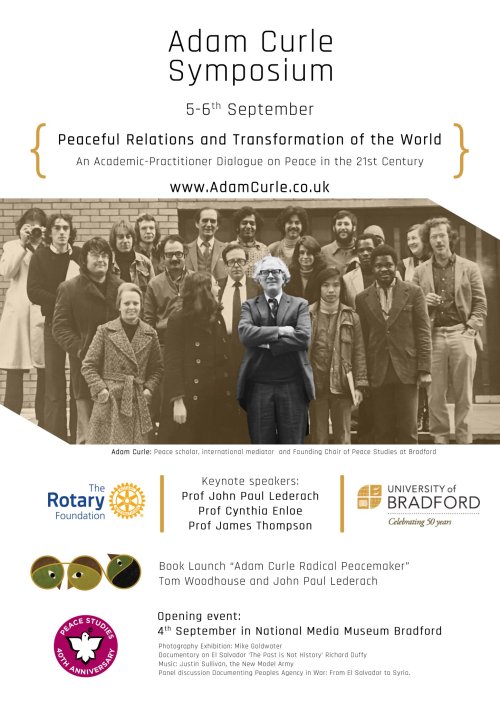 Join us at a Symposium at the University of Bradford which will bring together academics and activists from across the world to discuss peacemaking in the 21st century.  The event is on 5-6 September and organised by our colleagues in Peace Studies.  It celebrates the centenary of Professor Adam Curle, the first Chair of Peace Studies at the University.

Adam Curle came to Bradford with a distinguished academic career (across disciplines including psychology and education) and considerable experience of mediation efforts in conflicts across the world.  These, combined with the influence of Buddhist and Quaker ideas, led him to distinctive and important conclusions about peace studies.

At the time of his arrival in Bradford, he had realised that negotiation was not enough.  The negotiator might “ease a particular situation, but the circumstances, the rivalries, the oppression, the scarcity of resources – which had given rise to it – remained”. Peace studies should therefore be about more than “preventing or terminating wars”: those working in the discipline should identify and analyse relationships between people, groups or nations and then “use this information in order to devise means of changing unpeaceful into peaceful relationships”.  Not easy – Adam Curle likened the multiple and complex challenges of addressing violence to taming the mythological multi-headed hydra.

In 2016 people still face war, injustice and inequality … can Adam’s ideas help us as individuals and groups bring about more peaceful relationships?

The packed Symposium programme features talks, workshops, exhibitions, film showings, and the launch of a new book from Hawthorn Press, Adam Curle: radical peacemaker, by Tom Woodhouse and John Paul Lederach.  Above all, it is a chance to learn and share ideas with interesting and committed people.  Everyone is welcome and the charge for attendance is only £10.

Posted in 50th Anniversary of University of Bradford, Peace

Commonweal: a library for the good of all

Visitors to the Library at the University of Bradford will often come across references to “Commonweal” and maybe wonder what this means.   Wonder no more!

Commonweal means “the good of all”.  The Commonweal Library is an independent peace library run by Trustees and volunteers.  Commonweal is located within the main Library of the University of Bradford (handily just outside my office on Floor 1!) and is a treasure trove of books, journals and pamphlets on protest, social change, religions, ideas, and much much more.  Its extraordinary collections of campaign archives are part of Special Collections.

“Befriending Commonweal Peace Library“, a feature in the most recent issue of Peace News, is a great introduction to Commonweal’s fascinating story.  The author of the feature, Michael Randle, encourages activists and academics interested in nonviolent protest to make use of Commonweal’s wonderful resources.

I Vote for Radical Action! Free event at University of Bradford

Ernest Rodker is a conscientious objector and veteran of many direct action campaigns including Free Vanunu, Stop the 70 Tour, Anti-Poll Tax campaign and local campaigns.  Ernest will share details of these campaigns and how direct action has shaped his life.   He recently donated the Archive of the Free Vanunu Campaign to Special Collections, where it will form a fantastic resource for activists and researchers interested in nonviolent campaigning.  The lecture is brought to you by Commonweal Collection, an independent public library for social change. 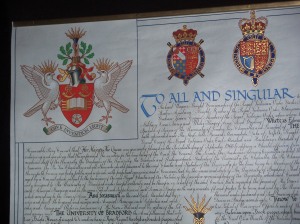 Detail from the University's Grant of Arms

100 objects Bradford is a new online exhibition from Special Collections, curated by Alison Cullingford and inspired of course by the British Museum/BBC series.  Each week meet one of the most important or interesting items from Special Collections. The first object is the University’s Charter, along with its companion, the Grant of Arms (shown here).  Thanks to “Red” Ted Edwards, our first Vice-Chancellor, the Charter includes a commitment to using knowledge for human welfare, which led to the founding of Peace Studies, and still appears today in ecoversity and other projects.

Posted in History of University of Bradford, Peace

First in an occasional series in which I compare J.B. Priestley’s wartime Postscript broadcasts to other regular WW2 publications, an extension of the Priestley’s Finest Hour project.

I recently catalogued Vera Brittain’s Letter to peace-lovers.  As an absolutist pacifist of the Peace Pledge Union, Brittain had a different view of the War from Priestley.

The audiences for the two series would have experienced them in different ways: text versus audio (though Priestley’s broadcasts were also printed).  Brittain’s audience had to subscribe; Priestley’s much larger audience had to expend less effort to hear him, and may have heard him by default – the radio happened to be on, or someone else chose to listen.

Actually, though, in a skim through Brittain’s Letters, I noticed the similarities between her pieces and Priestley’s rather than the differences.

The broadcasts and letters start in similar ways, with a letter, incident, idea leading to deeper thought about the War.  Both use everyday detail tellingly.  For example, this by Brittain about Hyde Park in August 1940 would have made an ideal Postscript: “I could not help wishing that Herr Hitler and Dr Goebbels could be transported here to see the vast London population which they have so often described as panic-stricken.  So accustomed has that imperturbable populace now become to military preparations of the most sinister type, that they have ceased to think of their meaning or even to notice them – except as props for their backs or convenient sandpits for their toddlers”. Both praise British stoicism and courage, and call for the energy put into war to be put into building a better world.

I ended up thinking about what the authors had in common.  Both of course were talented professional communicators, though clearly sincere in what they said.  The most important similarity is that both had experienced the horror of the First World War.  Priestley spent five years on the Western Front and lost all his boyhood friends.  He alluded to these things in his political writings of the 1930s and in the Postscripts, though he did not write about them in detail until Margin Released in 1962.  Brittain, as she described in the unforgettable Testament of Youth, worked as a VAD at the Front.  She lost her fiancee, her brother, and many friends.   Both knew what war meant.  Their life-changing experiences underlie both the Letters and the Postscripts.

Out now, the lucky 13th issue of Special Collections News, packed with images and news including Bravo PaxCat, Priestley’s finest hour, Celebrating Jacquetta, and You made me shove you!

Special Collections – University of Bradford
Create a free website or blog at WordPress.com.