Studying An Inspector Calls?  We are proud to have assisted the British Library in creating a fantastic new archive-based resource to help GCSE and A-level students, undergraduates and other learners enjoy and understand this work. 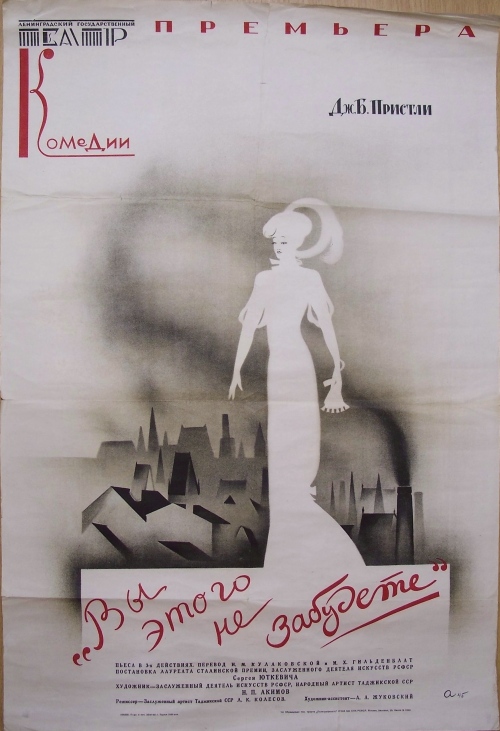 Poster for the first production of An Inspector Calls, in the USSR (archive reference PRI 9/1/7).

The resource, the Discovering Literature website, aims to set the Inspector and other great works of literature in their cultural, social and political contexts.  Two new articles, specially commissioned for this project, explain the story and influence of An Inspector Calls:

Journalist and author Chris Power explores the meaning and structure of the play in his Introduction.  He memorably describes AIC as a  “a morality play disguised as a detective thriller” in which all the characters turn out to be guilty: guilty of selfishness, hypocrisy and callousness.

Special Collections Librarian Alison Cullingford contributed an article reflecting on the ways in which Priestley’s  Bradford childhood and experiences in both World Wars shaped his political thinking and fuelled the anger and urgency that drive An Inspector Calls.

Both articles are extensively illustrated with high quality images from our Priestley archive and other collections, many made available online for the first time.

Do let us know if you find the material helpful in your study or teaching.  We like feedback!

Seventy years ago, in September 1945, a great English play had its world premiere.  J.B. Priestley and his wife Jane travelled to the USSR to see An Inspector Calls staged in Leningrad and Moscow.  Since its rapturous Russian reception, and a rather cooler (“almost hostile”) one in London the following year, the play has been seen, enjoyed, and studied by thousands worldwide. 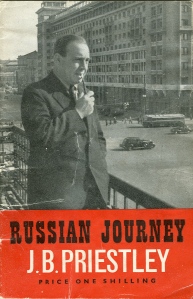 Front cover of Russian Journey, a pamphlet by J.B. Priestley

It uses the device of a mysterious inspector to explore how each member of a prosperous family contributed to the fate of a young girl who has killed herself.  Inspector combines Priestley’s fascination with the nature of time and reality with a powerful moral message.   While many aspects of the play are ambiguous and open to interpretation, its message could not be clearer – and remains highly relevant: “We don’t live alone.  We are members of one body.  We are responsible for each other.  And I tell you that the time will soon come when, if men will not learn that lesson, then they will be taught it in fire and blood and anguish”.

So why the USSR?  No theatre was available in London, and Priestley’s work was popular in the country.  He was at the peak of his fame, so it would be something of a coup to host his new play.  Not to mention that Inspector would be seen favourably, as it can be interpreted as an expose of capitalism. 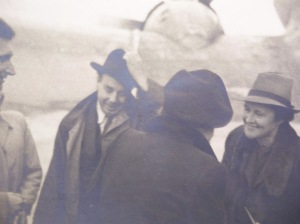 Visiting Britain’s ally so soon after the end of the Second World War was an extraordinary experience for the Priestleys; fortunately both wrote about it.  They found a warm welcome and wonderful cultural life, but also extreme poverty, repression, and squalor.  This weekend’s Guardian Review featured a lively account of their Russian Journey, written by Valerie Grove and based on the vivid letters Jane wrote to her children.  You can find out more about the fascinating poster and photograph album featured in the article (and shown here) in our 100 Objects exhibition. 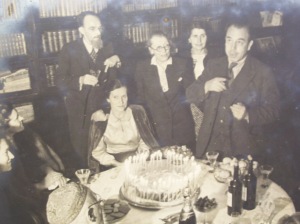 If this has tantalised you, you can see two interpretations of Inspector in the next few months:

If you don’t know the play, now is the time to catch up and see what all the fuss is about!

Credits: quotations from An Inspector Calls and Margin Released.

Brontes, Bollywood and JB: welcome to the Lit Fest!

Did you know Bradford has its own Literature Festival?  Over a hundred events celebrating the written and spoken word, from 15 to 24 May 2015, in a host of venues around the city.

The Festival has a distinctively Bradfordian flavour: 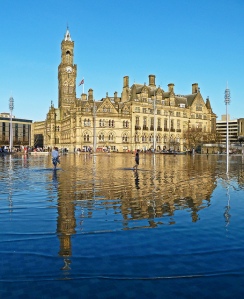 Not to mention colleagues from Peace Studies at the University sharing their fascinating research: Dr Munro Price on Napoleon‘s downfall and Professor Paul Rogers discussing the rise of ISIS.

For venues, prices, tickets etc and many more events, check out the full programme on the Festival website.

Some great reviews of the celebrated Stephen Daldry production of An Inspector Calls, now at the Novello Theatre, London.   This production of J.B. Priestley’s most famous and inspiring play dates from 1992, so is now becoming historic, but these reviewers felt that it remained as relevant and as dramatically impressive as ever.