Archivists!  Would you like to join our small and enthusiastic team?  You would be cataloguing the papers of this chap (Dr Calvin Wells), who pioneered palaeopathology (discovering ancient disease and injury from skeletal remains).

We’re recruiting an Archivist to work on the Putting Flesh on the Bones Project, funded by a grant from the Wellcome Trust and involving work with both Special Collections and Archaeological Sciences. The post is available for 18 months from 1 June 2017 and offers a fantastic chance to collaborate with academics and conservation/museum professionals, as well as Special Collections staff and readers.  Find out more on the University’s vacancy webpage.  Do contact me (Alison) if you have any queries.

If you were concerned with Hooke’s Law, would you be more likely to be a student of church history, a statistician, a manufacturer of braces, or a pirate?

From Shakespeare, which character said (and in which play)? “In sooth, I know not why I am so sad”.

Can you guess which quiz show sent these specimen questions to Bradford students?  No conferring!

Yes, it could only be University Challenge, the famously fast-moving and difficult quiz for teams of students, first broadcast in 1962.

In 1966, Students’ Union official Roger Iles contacted the programme’s producer, Douglas Terry, and its maker, Granada Television, to ask whether Bradford Institute of Technology (BIT) would be able to take part in the programme.  BIT was after all just about to become a “University”.  His enquiry was welcomed and Bradford was invited to put together a team for the autumn series.  BIT was thus the first College of Advanced Technology turned University to be recognised in this way.

The 3 February 1966 issue of Javelin shared the good news and the call for entries.  The  specimen questions were included to help students decide if they were up to the standard of the competition.  Answers at the bottom of this article  (No googling!).

Other stories from the 3 February issue:

Five students living in Revis Barber Hall of Residence had jointly hired a television set which was “capable” of receiving a hazy BBC-2: a slightly more “highbrow” channel than the existing BBC and ITV programmes, and with a remit including arts, culture and education.  Assuming the set could in practice receive the channel, the students would have been able to watch Playschool, Horizon, and (the following year) the unmissable Forsyte Saga.

Students were asked to stop stealing glasses from the Union Bar and were rebuked for using “vulgar language” in the “conveniences” on Richmond D Floor.  This had upset a member of staff and meant students were banned from the only toilets on the same floor as the Bar – inconvenient!

Ad of the Week

Excel Bowling (Canterbury Avenue).  Ten-pin bowling had become really popular in Britain during the 1960s.  Excel was a large chain of bowling alleys.

In January 1966 it looked as though Bradford might be at the point of achieving a century-old dream: its own University.  Or was it?

As early as 1868, local Member of Parliament W.E. Forster was clear that “if industrial universities were to be established in large centres of manufacturing, Bradford would do its best to become one of those centres”.  Such universities were indeed established: Leeds, Sheffield etc. acquired universities in the”red-brick” boom of the 1890s and 1900s.  Lack of local support and political influence meant Bradford missed out.

Scheme after scheme for university status foundered over the next century.  At last, in 1957, Bradford became Bradford Institute of Technology, one of eight Colleges of Advanced Technology, concentrating on university-level teaching and research.  But the CATS lacked the independence, kudos, and funding available to”universities”.

This unfairness was particularly noticeable during the early 1960s, as so many new universities were springing up.  These, as Robert McKinlay remarked in his histories of the University, achieved university status with all its benefits while often consisting of only a “Vice-Chancellor and a watchman’s hut”.  The CATs, with years of high-level work, buildings, staff and students, were still at a disadvantage.

To put right this anomaly, Lord Robbins in his 1963 report recommended that the CATs be granted Royal Charters to become technological universities.  It’s easy to assume that this meant the Institute’s move to university status was inevitable.

However, the lead article in the 20 January 1966 edition of Javelin suggests some students at least were not so sure.  Was there “hope for Bradford”?

Of course it is possible that uncertainty about university status was being exaggerated for effect.  Javelin reporters tended to be sarcastic and cynical!   Either way, the signs were correct: Bradford would indeed become a University before the year was out.

Part II to follow: what else was happening around the Institute and the City in January 1966?

Do Words give you the Creeps?

Do certain words give you the creeps?  The One Show on Friday 16 January 2015, filmed in locations around Bradford, explored the strange phenomenon of “word aversion”.

Watch out for Special Collections books (backgr0und of interview), our students and catering staff, and some great shots of Centenary Square.

Posted in Other news

Why should universities invest in their archives?

Special collections in universities aren’t just dusty things in basements that are kept because they are nice or old.  They’re part of the story of their institution, highlighting and documenting its distinctive qualities.  For instance, the University of Bradford has peace campaign archives because of the radical history of the University and the City and collections on dyeing and textile industries because we grew from the City’s need for technical education.  If properly cared for and catalogued, such collections are invaluable for research, teaching, community work, art and even student recruitment. 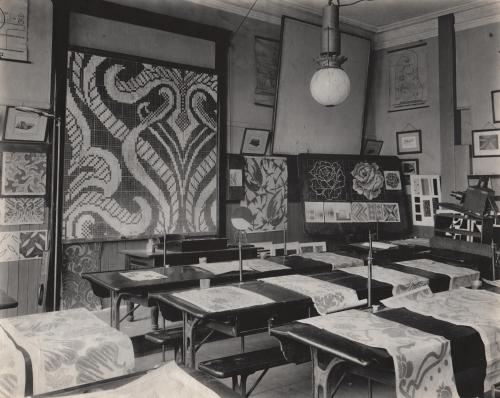 Unique and Distinctive Collections, a new report co-authored by Alison Cullingford and published by Research Libraries UK aims to help university senior managers see the potential of their collections and encourage them to invest in making more of them.

Work with us! Archivist for the New Atlantis Archive project

We’re advertising for a new colleague to join the Special Collections team: an Archivist to catalogue the Mitrinovic/New Atlantis Archive.

Mitrinovic (in the centre) and his group of followers

The Archive tells the story of an extraordinary man whose life and ideas are intertwined with so many others in early 20th century art, literature, politics and culture. It shows how he built a circle of followers who shared his aspirations towards a better and peaceful Europe.    We are thrilled that we will soon be able to make this important collection publicly available.

The post is part time, pro rata, for 16 months, and the key dates are 12 May (closing date) and 3 June for interviews.  Note that the post requires a qualified professional archivist with relevant skills and experience.  I welcome informal enquiries about the post by email.

Special Collections services will be very limited between 1 and 17 March (staff on annual leave).  Apologies for any inconvenience!

We’ve not blogged a great deal recently – this is because we have been occupied with our application for archive accreditation.  We have many exciting events and other news coming up so expect more here very soon.

A new exhibition in Gallery II at the University of Bradford brings together as never before the unique resources of special collections and the permanent art collection.  Arts Curator Amy Charlesworth, with help from Special Collections, explores the growth and significance of the most fascinating and distinctive facets of the University’s story: the Arts and Issues programme.

The programme encourages students to look beyond the subjects of their studies, links the University to local communities, and enriches the life of the University through visual and other artforms; the exhibition considers the early years of the programme to examine how and whether these aims are achieved.

Posted in Bradford, History of University of Bradford

I’m delighted to announce the arrival of a new colleague working on the University of Bradford’s heritage.  Amy Charlesworth, who started work this summer, is our new Curator of Arts.   She will be responsible not only for display and outreach work but for managing the University’s Permanent Art Collection.

This stunning image comes from Amy’s first exhibition in the University’s Gallery II, Art Forms in Nature.   These photogravures by pioneering German photographer Karl Blossfeldt offer unique insights into the shapes and textures of flora and fauna.  On show till 1 November 2013.

Amy’s role has much in common with our activities in Special Collections.  We are all here to care for and make the most of the University’s heritage and to use it to reach out to new audiences.   There are many ways in which we can work together and we have exciting plans for joint exhibitions later this year and in 2014.   Watch this space!

Follow Amy on Twitter for the latest on Arts on Campus and lots of other arts news too: @amycharlesworth.

PS The story of the Visual Arts at Bradford is a fascinating and complex story, beyond the scope of this little news piece.   More on this soon however.

Posted in Bradford, Other news

Visitors to the J.B. Priestley Library may notice changes on level 0 extension.  The area was home to artworks and heritage objects reflecting the University’s rich history, including the Charter and the Grant of Arms, the Commonweal Hoggett memorial, and a portrait gallery of vice-chancellors and other University characters.  These works are in store for safekeeping during major building works in the extension over the next few months.  The layout of the floor will change, so not all the art and objects will return to the same locations – I’ll share news of their new homes in due course.

On the move … a bit of gallery including portrait of Martin Bousfield, Chair of Council 2004-6, by Alan Hydes